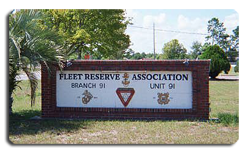 The Fleet Reserve is the oldest and largest association representing enlisted Navy, Marine Corps, and Coast Guard personnel. Established in 1924, FRA’s mission is to safeguard the pay, benefits, and entitlements of the active duty, reserve, and retired members of the Sea Services. The FRA is the founding member and active participant in The Military Coalition (TMC), a group of 24 military associations supporting legislation that protects and/or enhances programs for military personnel. Collectively the TMC represents over 5 million active duty, reserve, retired, and veterans of the uniformed services. Membership in the FRA is open to all enlisted personnel of the U.S. Navy, Marine Corps, and Coast Guard. Commissioned Officers of the Sea Services that have at least one day of prior enlisted service are eligible to join.

Look on our calendar for our weekly events!